Hey there friends.  We were originally planning to start up a devblog once we got going on our new project, as that just seems like a natural time to do so.  But after having a think about it and adopting our new ‘no time like the present’ mindset, we decided to give it a go RIGHT NOW.  Hopefully it will be a fresh take to read about the very end of a project from the perspective of a couple of guys that are trying to figure out this whole ‘marketing’ thing.

So a while ago we signed up for what would prove to be our first ever public appearance: Techweek, working with the Chicago chapter of the IGDA.  We didn’t really know what to expect, or where we would be at that point with our projects, but we did know that we need to introduce ourselves, and get more involved with our fellow developers.  Turns out it was a bit of a ‘micro PAX’ sort of thing.  We needed to put together a booth, and demo our games to anyone that happened to wander by.

As has happened just about weekly since officially forming Ragtag, this forced us into taking care of something we had been putting off for quite a while:  getting promotional materials ready.  We’ve needed to finalize our logo, get business cards, and other various things for a while now, and this was the perfect opportunity to do so. 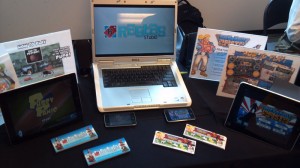 After we contacted our booth-experiened friends at The Men Who Wear Many Hats, it became clear that Jakprints would be the go-to place to get everything we needed for our booth.  After getting all of our orders in, we received everything within a week.  We were very happy with the print quality, the only drag was the inability to get everything you order shipped together.  And that resulted in needing to pay their $14 minimum shipping charge 4 times.  In spite of that, we still only paid $250.  In addition to the postcards you can see on the table above, we also got the following:

The totally sweet 6×2 banner we hung behind our booth.  We love this thing.  Around $60 shipped.  (pick above of Matt setting up before the show)

Our calling cards.  We each got a set, same style.  Also around $60 shipped.

In addition to giving us a great kick in the pants to get the above taken care of, the event gave us the chance to make lots of new allys with fellow Chicago developers.  In particular the guys at Lunar Giant Studios, were a huge help.  We spent a lot of time taking with them about their development process, as well as their experiences with promoting their products and getting their game on different platforms.  They were the source of a wealth of useful information, a lot of which we are taking advantage of as I type this.

There is no longer any doubt in my mind about the importance of networking and making connections with fellow developers.  It can be difficult for those of us with independent hearts to come to the realization that yes, things really can be easier if you get help from others.

Thanks to everyone for the great opportunity!  Lets do it again soon!

Lessons learned from releasing the Fist into the wild