Lets just get this out there… we missed an April update! We are terribly sorry! But there is a bright side – because we skipped a month, the May update is chock full of awesome! Lets get right into it.

April was a huge month for us. We worked really hard to get an internal milestone completed that involved us getting a large chunk of the game playable, and running on our various supported platforms. It also involved getting some of our lingering systems implemented, such as the checkpoint / save system. We are really happy to get over that hump, as it allows us to see the road to completion far more clearly.

Now then, lets show off some fun stuff!

One of the big tasks we recently completed was a first pass on getting the game running on the Vita! Here is a little teaser as proof. (Click the V to view full size)

We have our work cut out for us to get this big game running well on this little system, but we’ve made great progress!

The one and only Ben Crossbones has been spending a lot of time recording the gibberish voice over you’ll hear throughout the game. He’s more than halfway through recording, and what we’ve heard is hilarous! We’ll bring you some samples next month.

Next, Jake ‘Virt’ Kaufman has been tearing up his studio banging out some new tracks for Ray’s the Dead, and they are turning out great! Here is a new one for you to put in your ears:

We’ve been making rapid progress in getting all of our levels functioning with representative art and gameplay. Currently, we are blocking out the final two levels with the goal of having the entire game playable from beginning to end in the next few weeks. In addition, we are iterating on the levels we already have to prepare them for demoing / play testing. Here is a look at some concept art, an early screenshot from our Water Tower level, and one of our Halloween character sprite sheets. 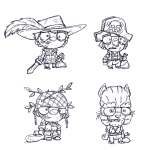 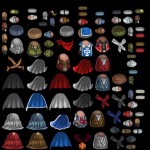 One thing we haven’t revealed much about are the variety of collectables and pick ups strewn throughout the world of Ray’s the Dead. We’ll crack that open by showing a video of one of the most extensive collectables: The Kickstarter Backer Gravestones.

We will have nearly 200 personalized gravestones hidden throughout the game. Most are slightly hidden from view, but designated by some subtle sparkly bits. When you find one of these, you can walk up to it and activate it to get a closer look. Fortunately, many of our backers were quite entertaining with their requests, so there are lots of funny tombstones to read. A likely trophy / achievement will be ‘Find all the Gravestones’.

Check out the video below to see what it will look like.

That’s all we’ve got for now. Back to work for us, and see you next month!