The first bit of news is that we are very close to relaunching the Ray’s the Dead Kickstarter!  The campaign will feature new insights and unseen footage from the game. You will be able to read about the new features, and all the developers collaborating on the project with us. Learn about how we have expanded Ray’s story, and a few more surprises. We are excited to launch the campaign in early August, and of course we have been cooking up some awesome rewards for our backers!

For a preview of the campaign visit our Prefundia page by clicking here. At the top of the Prefundia page you can enter your email to receive notification as soon as the campaign is launched.  Be one of the first to support Ray on his undead journey!

The second bit of exciting news is that Ragtag Studio is taking a major step toward ensuring Ray’s the Dead will be the awesome game we know it can be. Ragtag is relocating to Dallas, TX! 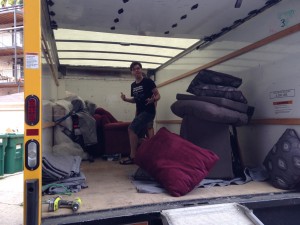 Matt starting to load the truck

That’s right, Shawn, who already lives in Dallas, will be joined by Matt and Chris the first week of August so all three of us can work side by side. This is a big deal for us and for the project. Being collocated will significantly improve our collaborative development process, because we have learned we work much better in person! This move will also allow us to reduce our expenses and keep our current self funding efforts going a bit longer.

Matt, Chris and their wives will dearly miss Chicago, but we all believe this is the best step for Ragtag Studio and Ray’s the Dead.

The view from Chris’ rooftop.

So Chris and Matt will be off the grid for a few days moving down to Dallas, but as soon as they land, it will be Kickstarter time!

So check out the Kickstarter Prefundia page, sign up to get an email notification when the campaign starts, and spread the word to help get Ray started off on his undead adventure!

← Indy PopCon and a new addition to the Ragtag Family
The Store is open for business! →

3 comments for “Ray’s the Dead Kickstarter and Ragtag Relocation”